Democracies In Peril. Taxation and Redistribution in Globalizing Economies 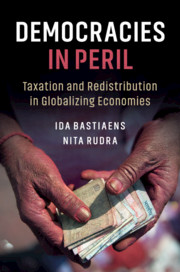 Globalization is triggering a 'revenue shock' in developing economies. International trade taxes - once the primary source of government revenue - have been cut drastically in response to trade liberalization. Bastiaens and Rudra make the novel argument that regime type is a major determinant of revenue-raising capacity once free trade policies have been adopted. Specifically, policymakers in democracies confront greater challenges than their authoritarian counterparts when implementing tax reforms to offset liberalization's revenue shocks. The repercussions are significant: while the poor bear the brunt of this revenue shortfall in democracies, authoritarian regimes are better-off overall. Paradoxically, then, citizens of democracies suffer precisely because their freer political culture constrains governmental ability to tax and redistribute under globalization. This important contribution on the battle between open societies and the ability of governments to help their people prosper under globalization is essential reading for students and scholars of political economy, development studies and comparative politics.

Who Really Gets Hurt? Globalization and the Race to the Bottom in Developing Countries. 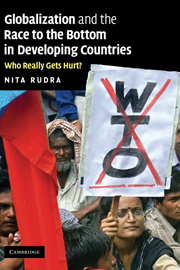 The advance of economic globalization has led many academics, policy-makers, and activists to warn that it leads to a 'race to the bottom'. In a world increasingly free of restrictions on trade and capital flows, developing nations that cut public services are risking detrimental effects to the populace. Conventional wisdom suggests that it is the poorer members of these societies who stand to lose the most from these pressures on welfare protections, but this new study argues for a more complex conceptualization of the subject. Nita Rudra demonstrates how and why domestic institutions in developing nations have historically ignored the social needs of the poor; globalization neither takes away nor advances what never existed in the first place. It has been the lower- and upper-middle classes who have benefited the most from welfare systems and, consequently, it is they who are most vulnerable to globalization's race to the bottom.

THE POLITICAL ECONOMY OF THE BRICS COUNTRIES